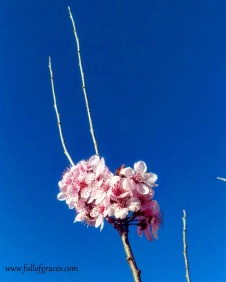 It turns out that the decorative purple leaf plum trees in our front yard yield a fruit called a cherry plum.

Gabriel, in his infinite chef wisdom, burst into my room the other day and said “Mom. We need to jam these plums.” Then he rallied Ross from next door and they picked 5 lbs.

After I said Yes, we should jam them! I right quick looked them up to make sure they weren’t poisonous.

And a whole new world opened up on my laptop.

First, the tree is called a prunus cerasifura:

Purple-leaf plum trees are a precursor to the domestic plum and cherry tree—an ancestry told by its scientific name. The genus name Prunuscomes from the Latin for “plum.” The species name cerasifera is derived from cerasum, meaning “cherry,” and ferens, “bearing.” It was named for its fruits before modern edibles were cultivated—now, with domestic plums and cherries, Prunus cerasifera classified as an ornamental tree, not an edible one. But purple-leaf plum tree enthusiasts the world over will tell you the fruit’s virtues are overlooked , and they will share recipes for cherry plum cordial (good with seltzer or gin), compotes (add a sugar syrup), and jams (use brown cane sugar and try a dash of chili). (www.gardendesign.com)

Next, when I looked for said recipes I found these two sites:

Eat Weeds is a site devoted to the 25,000 edible plants that grow in the world, trying to raise our awareness past the meager staples in the grocery store.

Falling Fruit is a non-profit dedicated to mapping the bounty of urban streets for foragers. As the website says By quantifying this resource on an interactive map, we hope to facilitate intimate connections between people, food, and the natural organisms growing in our neighborhoods. Not just a free lunch! Foraging in the 21st century is an opportunity for urban exploration, to fight the scourge of stained sidewalks, and to reconnect with the botanical origins of food.

Look. I don’t know about intimate relations between people, food and natural organisms. But I did think about the many orange, lemon and apricot trees planted on urban Southern California streets that flower, fruit and rot to waste.

Same thing in Oregon, where blackberries grow in riotous abandon.

No one knows who’s fruit that is, at the park, on the parkway, on the median. Can I pick it? Or not?

Because of this confusion, the food goes to waste.

There is a person—I won’t name names, but she gave birth to me—who’s been known to cruise the alleys in her neighborhood and snatch low fruit hanging over people’s fences in the alley. A few weeks ago I was in the car when she directed my dad into an alley, leapt from the car, snatched the tangerines hanging over the fence and jumped back in. On the way home from church, no less.

All right, she had permission. And a point when she said “What? One family can’t eat all that fruit by themselves!”

Such an easy thing, to allow others to pick the fruit from your trees.

Well, consider my awareness raised. And my cherry plums jammed. This post where I got the recipe has all the same pics I took, so I’ll just leave it at that. They kind of taste like cranberries, but I think we should have let them ripen in the sun a few more weeks. Next, I’m going to try cherry plum cordial (alcoholic and non-alcoholic) and brandied cherry plums.

I’ll keep you posted. In the meantime, spy around your neighborhood and see what you can forage.

*JFK Amy already thinks I am the most crunchy Pioneer Woman-y mom she knows. Urban foraging just might push her over the edge.