Over time, a lot of negative things have been said about the female characters in the classic Disney fairy tale movies. The original princess, Snow White, finds her greatest worth in cooking and cleaning for seven little men. Aurora actually just sleeps until Prince Philip makes out with her, and instead of standing up to her wench of a stepmother, Cinderella passively endures abuse after abuse until her prince (does he even have a name?) sweeps her off of her slipper-losing feet.

The more modern Disney princesses have a little more spunk, and more often than not, control their own destinies. Belle wants adventure in the great wide somewhere, Merida bucks tradition and refuses to get married, and Elsa and Anna rely on their own act of true love to thaw Anna’s frozen heart. Awesome.

As a mom of two girls, and a self-proclaimed Disney-phile, I fill our house with the movies, merchandise, tiaras, and princess dresses. And while I’ve never taken much stock in the idea that these movies “train” young girls how to behave, I do wonder what, really, it is that they are learning from these movies. Because let me tell you, these girls love them some princesses. Love. And truth be told, so do I.

Merida – I like that she shoots bows and arrows

Rapunzel – I like her long hair and frying pan

Snow White – I like that she’s nice to the animals

Sleeping Beauty – I like the way she dances so beautifully

Cinderella – I like it when she makes clothes for the mice

Elsa and Anna – because they love each other

What I’m taking away from this, folks, is that my daughter is learning that it’s pretty cool to have a good talent and to be strong. She’s also learning kindness. She’s learning that people express themselves in different ways. And she is learning that sisters can also be best friends. What great lessons; critics be damned.  I guess we’ll be renewing our Disneyland Annual Passes again this year! 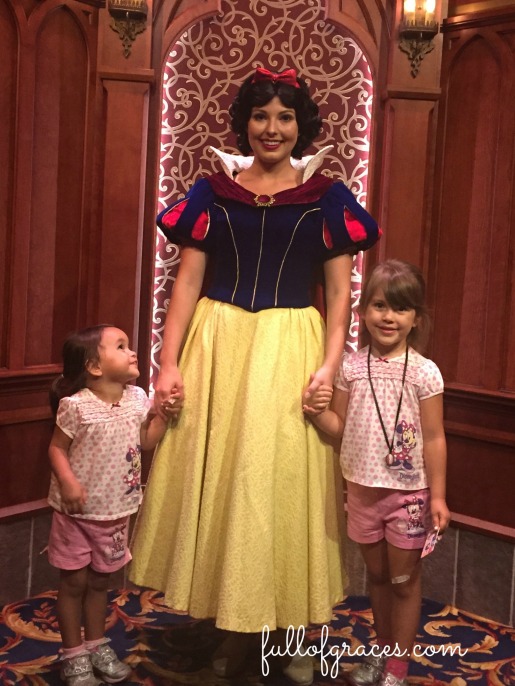 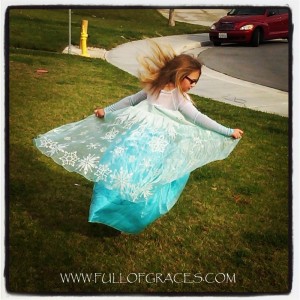 I’ve heard everything feminists have to say about Disney Princess culture and I get it. I really do. I’ve seen it in my own home. Sometimes Kate puts on that Belle dress and the Beast comes out, all imperial orders and commands.

No one will be shocked to hear that my daughter roars right past princess to Queen.

But the last two Disney princess movies have been different. In Brave, Merida is the tomboy of all tomboys, with her riotous curly hair, and she takes a pretty strong stand against her mom turning her into a proper princess. She has to come of age, because she makes a mess, but then she cleans it up. She fights for her own honor and there is no handsome prince in that movie at all, unless you count the triplets.

Now we have Frozen, with its amazing soundtrack.  Most of you know what I’m talking about. But if you’ve been in a hole for two months, go to Youtube and search “Let it go”. See what happens next.

Kate got an Elsa dress for Christmas, of course, because Elsa is the Queen and Anna is just her princess sister. She has memorized the whole soundtrack and for a while, she sang Anna with her purer soprano while I sang Elsa. But then Kate decided that Let It Go was the best thing in the history of ever, and my solo became a duet.

Or she sings it alone. Like the other day, while I was cleaning the kitchen and she was cleaning up her toys in the loft. This is what I heard:

THAT PERFECT GIRL IS GONE!

Here I stand in the light of day!

Let the storm rage on

The cold never bothered me anyway

And I thought Oh yes, my sweet girl. When the world asks you to be perfect, bombards you with false images and makes you feel like you aren’t enough, I pray to the good Lord that you will rise like the break of dawn and make your stand.

Learn from Merida that you can’t selfishly disregard your responsibilities as a member of our family, our community, our world. And learn from Elsa that you should never hide your magic to be what others want you to be.

Sometimes that will be easy. And sometimes you will have to fight against the storm.

In these two movies, there is no happily ever after. There is no guarantee that a few songs and dances have earned Merida and Elsa charmed lives. They only climbed the first mountain, of accepting who they are and what that means. And that’s something we all have to do.

PS: Before anyone says “But the Disney characters bombard little girls with false body images, I saw that article on HuffPo that pointed out that Anna’s arm was thicker than her waist and what is UP with their eyes??” I asked Kate about that. “Does Merida look normal to you?” I asked “With those great big eyes?” She looked at me over the top of her glasses like I was the silliest mama ever. “She’s a cartoon. She’s not supposed to look like a human.” Duh. 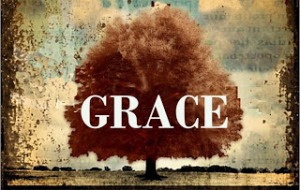 One of the great things about being anywhere Disney is this: ain’t no one judging anyone, since we are all one dropped ice cream cone away from the Mother of All Meltdowns.

There are still moments that test this collective patience.

It was my fault, since Anne had been in a swim diaper for five hours. First she was playing in the water at Typhoon Lagoon and then she was asleep for two hours and then it was time to go, so I threw her in the stroller and we headed towards the shuttle.

And of course, as we came around the corner, there was our bus, five stops down. I started running with Gabe and the stroller, waving my arms like a crazy mama who needs to get on the bus now and not 20 minutes from now. I put Gabe on the first step of the bus so the driver couldn’t leave without us, reached down to pick up Anne, turned to point to Shea running with Kate. Shea took one look at me and yelled “OH MY GOD! POOP!”

I looked down into the stroller—the rented stroller, BTW—and saw the biggest lump of poop I have ever seen.

The next five minutes are a blur in my memory, punctuated by Gabe needing to tell me right now about the flies swarming the poop in the stroller and also needing to know right now why flies in Florida are blue. Shea whisked the stroller away to the bathroom. I had to pre-clean Anne to get her suit off. And yes I did push lumps of poop through the slats of the bench onto the cement, where they were immediately covered with blue flies.

And then, when I had the baby cleaned up and diapered and the bench reasonably cleaned and Shea was back with the stroller and the bus was turning the corner into the parking lot, Kate says “Hey Mom. Did you know you have poop on your cover up?”

Sure enough, there was poop on my cover-up, so I took it off.

And that means that I—of the soap box modesty post the day before—rode the bus back to the hotel wearing my swimsuit and nothing else, holding my baby girl wearing her diaper and nothing else.

I refrained from grabbing the shuttle mic and explaining to everyone why I was wearing my suit and my baby was only wearing a diaper and we all smelled like poop.

But only just barely.

We just got home from a wonderful vacation, courtesy of Shea and State Farm. We spent six nights at the Walt Disney World Yacht Club resort with hundreds of other rock star State Farm dads and moms and their families.

I have two stories from our trip that I want to share. This one is a Here moment. The next one is a “This stuff only happens to Jen” story. Stay tuned for that Friday. Unless you have a weak stomach.

Two years ago, we were at the same hotel for the same week at the same State Farm event. I was a year out from my cancer surgery and treatment. We had been cleared to try for our third baby, but four months had passed with no results.

Everywhere I looked there were babies and pregnant moms, and my heart ached. After four months of trying, which was longer than it took with Gabe and Kate, it was hard not to feel defeated, and angry at my cancer and my age. Shea had worked hard for the trip and the kids were super excited, so every day I took a deep breath and made my outsides look happy.

It wasn’t that hard to do, in the relaxing lap of Disney luxury and with the joyful noise of my kids’ laughter. But there was a film over that vacation that darkened it just a bit.

Thankfully, we had our third baby. Her due date was nine months to the day after we arrived at Walt Disney World.

Last week, when we walked into the lobby of the same hotel, a wave of anxiety and longing swept over me. The feeling stayed with me when we swam at the pool that night, surrounded again by babies and pregnant women. It wasn’t until the next morning, as Annie toddled around the lobby and Shea said “Look how big she’s getting” that I realized I was holding my breath, just like two years ago, waiting for something and scared that it wouldn’t happen.

But there she was, dragging her blankie across the floor and smiling up at the bell captain.

And my heart quieted. It was a moment of powerful Grace.

I have struggled with the knowledge that we could be done having kids. Even with three c-sections and cancer and postpartum anxiety and the fact that Annie just…won’t…wean, I thought maybe there would be time for one more.  The longing was not as strong or loud as last time, but it was there. I prayed over the last year to know if the longing was mine alone, or placed in my heart by God. And I also asked that if another child was not in The Plan for us, could God please remove the longing from my heart?

I prayed for contentment.

I guess sacred moments don’t always happen in sacred spaces. Or maybe sacred moments make places like hotel lobbies sacred. Either way, in the middle of the Yacht Club lobby at Walt Disney World, my prayer was answered. I saw my family, and I knew it was enough. More than enough. I understood that God’s plan is for us to move on to the next phase, that there is something else coming our way.

It’s the end of the having phase of our parenting. Now we move on to the raising part.

And the space in my heart where the longing used to be is peacefully empty. It’s reserved. I don’t know for what or who, but it’s ok not to know.

I am contently*waiting for the something else while I thank God for answered prayers and moments of Grace.

*I think I made a word up right there. But you know Dana and I used to be English teachers, which totally qualifies us to make words up. For reals.