Dana and I are running in twelve different directions this week. So here’s a spooky post from two years ago…and last year…but who doesn’t love a ghost story? 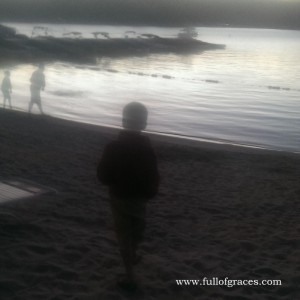 Growing up, we had a ghost in the house. I’ll put that on my mom. And if my mom was writing this, she’d tell you the same.

We’d lived in the house probably ten years before we put it all together. We sat down as a family and told each other all the weird things that had happened that we thought were just weird coincidence or the creakings and squeakings of a 40 year old house. That night, I named her Dorothy.

Dorothy was the source of the knocking on my bedroom wall, the reason that the dog sat up and begged from no one. She whispered in everyone’s ear, waking us up in the dark of night. Up to that point, none of it was scary. Just weird.

But that dinner was like her coming out party. Once we acknowledged her presence, she got busy.

One night Teresa was playing with my mom’s music box, a masquerade clown that played “Music of the Night” from Phantom. As if that in itself was not creepy enough, two hours after she left, I was watching TV by myself when I heard the box play about six slow notes in the dining room. It did that sometimes, like it hadn’t quite wound all the way down.

Thirty seconds later though, that thing started playing loud and fast like someone had wound it all the way up.

I screamed for my brother, who yelled back “I’m not coming out there!” My mom came running up the hallway and grabbed the box, which had indeed been wound all the way up.

My dad hired a painter to paint the family room. After six hours they wanted out. The paint fell over, the brushes moved from where they had been left, the TV switched on and off. “You got a ghost, boss” the painter told my dad.

At Christmas, the stockings my mom made when we were all babies, that hung on the mantle every year, and were packed away in the same place, were gone. My mom turned the house upside down. Nothing.

When we dragged the decorations out for the next Christmas, there they were, right on top.

I lost a pair of jean shorts, my favorites. I looked for them everywhere, even in my brothers’ drawers. Then I forgot about them. One day in the middle of winter, I pulled a load of whites out of the dryer and mixed up among them—my blue jean shorts.

My brother used to surf early in the morning. The kid never remembered his house key. He’d tap on my bedroom window so I could get up and let him in the back door. One Saturday morning, he  called my name and tapped, and I got up and opened the back door. Which set off the house alarm. Which brought everyone running, including my brother who’d been asleep in his bed.

It got to be a thing. My mom, standing over the tv, turning it off only to have it turn right back on. “Dorothy, cut it out!” she yelled finally, and that time the tv stayed off.

One night I was doing the dishes. It was just my brother and me in the house. He came into the kitchen to get a drink, but then he bolted for the back door and locked it. “I just saw someone outside!” he said.

“I’ve seen that. I think it’s Dorothy” I told him.

And then this night. I was doing the dishes. It was dark. The rest of the family was watching tv in the other room. I looked up from the sink, into the window, which was like a giant mirror, reflecting the room behind me. And I saw a woman with blond hair, in a long black dress, walk into the room towards me. I froze, and watched as she turned and walked out.

When I ran out into the family room to tell my parents, my brother said “I thought I saw someone walk into the dining room just a second ago”.

The mystery was solved one afternoon at my grandparent’s home. I was telling Dorothy stories and my grandmother, a few Canadian Clubs into the afternoon, said “We had a ghost here too. Bessie.” She then launched into a list of Bessie stories that sounded a lot like Dorothy. My grandmother thought she haunted a painting they used to have.

“Oh sure, since we got rid of the painting” my grandmother said.

“We gave it to you years ago! The one in the living room.”

And I knew exactly the painting she was talking about. A delicate, Romantic style portrait of a young girl, her face glowing against the background, even in the dark.

The girl in the painting was not a blond. And she was not dressed the way that Dorothy was dressed the night I saw her. But since the day my dad took that painting off the wall and sent it to Goodwill, there has never been another Dorothy incident in the house.

The snow has always been wondrous to me. Maybe because I was a So Cal girl and my life was steeped in sunshine, or maybe my soul has always yearned for the dark quiet of winter. I am blessed to live now where the snow is a gentle visitor, hanging around just long enough to make our valley beautiful. #ourladyofthemountain