The Best Princess of Them All

In between, there was only one princess in the world and she had cinnamon buns on the sides of her head.

I was 5 when Star Wars premiered. You know what I wanted for Christmas? A blaster. I was 12 for Return of the Jedi. It wasn’t until years later that I realized the bikini was a thing. All I knew was that she climbed up on that big bastard Jabba and sent him to hell.

I wanted to be her with every fiber of my being. And it had not one thing to do with Han Solo. I wanted to lead a resistance, fly an X-wing fighter, rip a blaster out of my holster and defend my droids.

I SUPER wanted to ride those cool speeders through the forests of Endor, wiping troopers off on giant redwood trees while wearing a camo cape.

A camo cape. Think of all the things a camo cape can mean on the back of a bad ass princess.

I know that Carrie Fisher wasn’t Princess Leia. And I think that playing Leia cost Carrie something.

But I also think there was a lot of Carrie Fisher in Princess Leia and that if she hadn’t been such a brave young woman, my generation would have spent more time asking ourselves “Am I pretty??” instead of “How can I be an Imperial Senator when I turn 18?”

“Stay afraid, but do it anyway. What’s important is the action. You don’t have to wait to be confident. Just do it and eventually the confidence will follow.” 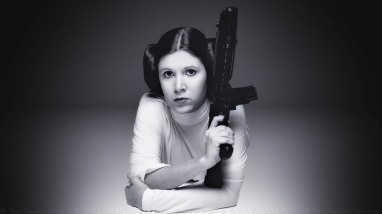