On Saturday we rafted a meek portion of the Rogue river, with some local friends. Marcy grew up rafting the Rogue and her girls are pretty experienced on the water. They’re a water family, since her husband Kevin is an ocean fisherman by trade.

I also have experience rafting and love it–although I have always done it with a guide. Kate and I rafted the whitewater on the Rogue just a few weeks ago. My motto while rafting is “No Swimmers”. Once on the American river, when we went high on a rock, I reached back and kept the guide in the boat while letting one of my friends go in. I have never fallen out.

We set off in two boats—Marcy and me in one with the little girls and Shea and Gabe with Kevin and their older daughter Sophie.

This part of the Rogue is class 1 to 1 ½. Whenever Marcy talks about rafting the river, she always says some form of “You have to be careful”. You’d never know that from the rafting companies that shuttle anyone 10 miles up, give them a boat, a life jacket and some oars and tell them “Be back at the landing by 5 or there’s a late fee”.

I wasn’t worried at all because Marcy is exactly like a rafting guide, and gives directions in a voice I am pre-programmed to obey. The girls were having a blast with the water guns, the river was packed and the sun was warm.

I don’t know how it happened. We were trying to go right and Marcy told me to dig in. It was shallow and my oar got stuck but I didn’t feel strain, leverage, anything.

I was just in the water.

Facing the wrong way. Mashed against a boulder by the boat. And the water was COLD.

Later Marcy told me we were in the Rock Garden, a section of the river where there’s a wide, rocky and shallow sand bar that falls off into deep, fast moving and boulder-y water.

“It’s the very place I didn’t want to dump anyone.”

I had a hold of the side rope, so when the raft pushed me off the boulder, I was able to turn and get my feet out in front of me. This is super important–to go feet first and flat down the rapids, like a paper boat.

Once we hit calmer water, I had to get back in the boat, with only 50 yards to go before the next shallow part. I still couldn’t touch the bottom, so Marcy and I were going to have to haul my butt in together.

There was praying. And cursing. Actually, it was all mixed in together, but God knows how Marcy and I roll and He loves us still. She pulled and I pulled and my body was not working right from the cold but I hooked a leg and then between the two of us, our guardian angels and three years of yoga, I got back in the boat.

Marcy and I laughed hysterically for a good two minutes. Then we decided we are Amazon sisters for life.

I tend to see the beauty of the river, its calm implacability, the way it can adjust to and overcome obstacles. I identify with the strength of the river, mighty and eternal.

But underneath, the waters are roiling and dangerous. If we had ignored the danger, been drinking or not wearing life jackets—like so many boaters we saw on the river—things could have gone very differently.

I know that somewhere in this story, there’s a lesson to learn. I’m not ready to think about it yet. For now I’m content to count my blessings—I was never really in any big danger—and ice my knee. 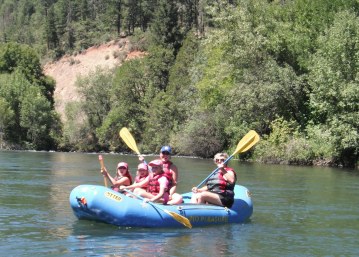 The snow has always been wondrous to me. Maybe because I was a So Cal girl and my life was steeped in sunshine, or maybe my soul has always yearned for the dark quiet of winter. I am blessed to live now where the snow is a gentle visitor, hanging around just long enough to make our valley beautiful. #ourladyofthemountain