When I was a little girl, my parents would play a card game called Rook with my brother and his wife. It’s played with a special deck of cards and involves a trump suit, bidding on the hand that you’re given, hoping that your partner has a few cards of the trump suit, and that the holes will be filled in with what you pick up in the Kitty. If you know my dad, or have read about him here, you know that my dad did not like to lose… but he was also not afraid to take a risk. So at times, he would bid on hands that weren’t that strong, really hoping that his partner would come through in the end. Then the game would begin. He would be missing the high card of his trump. Tensions grew at the table as he collected his point cards, not quite making the bid. Who had the high card? The opposite team would win control of the round, throwing points into the pot that would cripple him. Then, from across the table, his partner would throw on the missing trump card! The round was saved; dad would make his bid. A wry smile always crossed his lips, a cackle of a laugh would explode out of his mouth, and he would say, “You can’t play without a partner!”

We are a very team-oriented family. We watched lots of baseball, basketball, football, volleyball. We played all those sports, too, always supporting one another’s efforts. In fact, I remember one time my brother was playing church league fast-pitch and I was arguing with the umpire from the stands behind home plate about a called strike, which clearly was a ball, while my brother was still at-bat. He was furious with me.  But we were partners, me and him. And if someone was doing my partner wrong, I wasn’t going to sit idly in the stands. You can’t play without a partner.

I took the idea of team with me into school sports, which I loved dearly. When I began playing volleyball at Long Beach State, I really took the idea of team to heart. It was obvious that we were only as strong as our weakest link. Sometimes our teammates didn’t like each other off the court, but one thing we knew was that we had each other’s backs on the court. We weren’t friends all the time. In fact, we weren’t afraid to get in each other’s face. But it was all in the name of the united goal, a Final Four win. We couldn’t do it just on the backs of a few “stars.” I remember being on the court in serve-receive, looking at the three other passers. We each had our job. I would take deep, my partner had short. If the ball came cross-court, my job changed, so did hers. We stuck to our roles. What I couldn’t get, she would. What she couldn’t get, you KNOW I would. You can’t play without a partner. 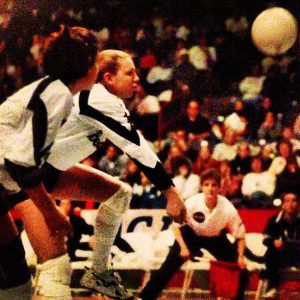 This summer has been a difficult one for me.  Those of you who read us regularly have noticed that I haven’t written, not a word, in months. And this isn’t my first hiatus. When my dad was sick and dying, I took a good chunk of time off, too. And do you know what has happened during both times I couldn’t get words onto page? My writing partner, my friend, Jen stepped up. Without frustration, without question, without hesitation, she has kept writing, week after week, so that our blog wouldn’t fade away. We both love this blog, but neither of us can do it alone. She has sustained us, once again. But that’s just the kind of woman she is. She sees a need and she fills it. She sees someone hurting and she helps. She sees her friend falling, and she picks her up, holds her hand, and helps her get back on her feet. You can’t play without a partner, and I am so grateful that Jen is mine.   Thank you.