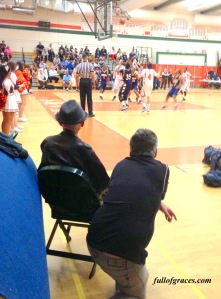 My dad was this great basketball coach.  For many years he ran a city league team called The Cherokee that boasted some former pro players, some former college players, and just some crazy-good scrappers.  He also coached a CIF championship team and a state championship team at Eisenhower High School in 2003-2005.  When we walked into a gym anywhere in the Inland Empire, chances were that someone would recognize him.  And he loved that.

When my nephew JD, his grandson, began to show some real talent and skill, my dad was thrilled.  He trained him and watched every game that he could.  Last year, JD, a sophomore, made varsity.  Then Dad got sick.

As the basketball season wore on, Dad wore down.  Down to the tune of about 125 lbs.  And then he decided that he would go out to a game.  It was a big deal.  He hadn’t been anywhere except the hospital in months.  He wouldn’t be able to walk from the parking lot to the gym.  So we arranged for closer parking on campus.  He was immuno-compromised.  So we decided that he would arrive during the game to hopefully avoid being close to too many people.

Instead, as I walked into the gym, there was a familiar face.  One of the refs was a Cherokee.  Cameron stands at a foreboding 6’8” and weighs about 260.  I don’t think he’s ever had an ounce of fat on him.  Last summer I had seen Cameron again with my dad.  I had recognized him immediately and introduced myself.  “I remember when you were a player,” I had told him. “You were really great.  And I knew great when I saw it.”  He smiled.

And as I walked in the gym and saw Cameron reffing that night, something stilled inside my heart.  This was all meant to be.  During varsity warm-ups, before my dad arrived, I found Cameron mid-court.  I explained how sick dad was, and at center court in the Riverside Poly gym with my nephew warming up behind me, I cried.  And cried.  And cried.  And I felt Cameron’s arms around me, buried my head in his chest, but the tears wouldn’t stop.

I asked him if he would go up and talk to my dad again.  He wouldn’t recognize Dad because of the drastic physical changes he had undergone, but I would point him out when he arrived.  Of course he would, of course.

My parents ended up arriving before the game.  Dad was so thin, so frail.  He shuffled across the gym floor, what a contrast to the man who normally strutted into the gym.  A wool fedora covered his bald head; his leather jacket and scarf bundled him against the cold January wind.  He sat in a padded chair that my brother had found him, away from the bleachers.

I flagged Cameron down and pointed in Dad’s direction.  I watched from my seat in the bleachers, holding my 2-month-old little girl, as Cameron walked over and shook Dad’s hand.  He knelt so Dad wouldn’t have to stand.  They talked for a few minutes and my dad was beaming.  Cameron slowly walked away and took a seat on the players’ bench on the opposite side of the gym, put his head in his hands, and wept.  His shoulders shook.  He removed a handkerchief from his pocket and dabbed his eyes as the game clock sounded.

It was a moment of grace.

And the grace came in the knowledge that Dad truly had touched someone else’s life.  He poured everything he had into basketball.  And here in this man, I saw that it was all worth it.  The late nights, the tournaments, the weeknight games, the traveling, they were all worth it because Dad was important to these men.

The grace came in the knowledge that this loss, as afraid as I was of it, would not be mine alone.   And in that moment, I was not the only one crying for my father.

As I sat up there in those bleachers, there was also the stark realization that dad truly was sick.  Cameron’s reaction somehow confirmed the dark whispers that I didn’t want to listen to.  He would be gone soon.  And how does life go on without him?

But the grace came in the knowledge that my dad would not be forgotten.

Though that realization grew over the next few months, so did the love in my heart.  I drank up every opportunity to see his eyes, to hear his voice, to hold his hand, to sit with him, even in silence.  I saw his love for me and for my girls fill his heart, and spill out in his smile.

Throughout Dad’s illness God gave us many of these moments:  there was the moment when my dad came to our new house for the first (and only) time, ate at our table, relaxed in our back yard.  There was the moment he felt good enough and strong enough to stand in the kitchen and hold my baby, just as he had held me.  There was the moment my 2-year-old refused to leave his side, and napped beside him as he lay in his hospice bed.  And yea, though we were walking through the valley of the shadow of death, these moments sustained us, and him, and sweet grace smoothed the way.

7 thoughts on “Moments of Grace ~ Dana”