I don’t like to be hot. I have never liked to be hot. God knows this about me and gave me parents who lived near the ocean and who listened to their children when we begged them to buy a house with a pool. Many a day growing up, I washed the sand from the beach out of my hair and bathing suit by jumping into the pool.

It was a lovely way to grow up.

Shea and I got all big in our britches after we married and decided that one thing married folks do is buy a house. The only place we could afford one without moving out of state—and without moving to the desert—was the Inland Empire. The average temperature out here during July and August is 100 degrees. We are an hour’s drive either way to the beach.

And since we bought a brand new house, the only thing in the backyard was dirt.

“We’ll get as pool in a few years when we have some equity in the house”, we said. Two years later we were $200,000 upside down. And even though I said I wanted a house sideways to the sun, we ended up with one that faces the sun. Which means we take the heat on the front of the house in the morning (like this morning when it was 89 degrees at 9:30) and the back of the house in the afternoon.

We nailed it. By the second summer we had them, they were almost 20 feet tall and cast shade over the backyard grass by 3 pm. By the fifth summer, they had touched and my kitchen and family room were shaded by 3 pm. This Spring I noticed that our bedroom windows were in shadow by 5 pm, protected by a solid wall of 35 foot tall trees. They had done exactly what we needed them to do. They sheltered the house.

They also blocked the garage light of the neighbor behind us who works nights and whose wife only feels safe if her driveway is lit up like noon. They brought an extended family of wrens into our backyard who woke us up with happy chirps in the morning. For two summers, they were covered in hundreds of thousands of lady bugs for three weeks. They housed all kinds of bugs and spiders, and the geckos that came to eat them. When the wind blew, they rustled with the most peaceful, restful sound. 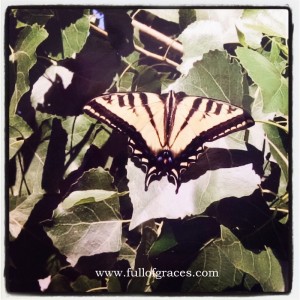 And every Fall, the leaves turned bright yellow and fell to the ground in heaps and heaps of glorious color.

The morning after we got back from Disney World in June, I went out to get the paper and noticed that one of the tree roots had sprouted next to the roses.

In the front yard.

The roots had been a problem for a while. We’d dug them up once and they’d grown back. The dirt is hard out here and the tree could not grow down, so it grew out.  But never in a million years did we think the roots would reach under the house to the front yard. It was a good 40 feet from the trunk and under at least 25 feet of concrete.

Shea did an inspection around the house and found something even worse. There was a four foot sprout under the fence in the neighbor’s yard. And the neighbors, God bless them, have a pool. The sprout was very close to the edge of the pool.

The trees had to come down.

Maybe you think that would be an easy decision, but it’s not. We picked those trees and grew those trees. We have pictures of them when they were $35 saplings and now they were giants. It was painful to end something so grand and proud. I almost felt like I had tricked them into life and now at my convenience, they had to go.

It took 20 minutes to cut down seven years of life. The kids and I watched from the window and I felt every moment of it. 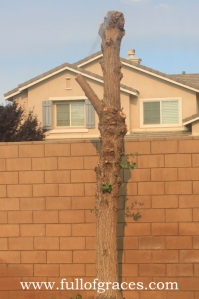 Then last weekend we went camping. Our gardener is on vacation, so we’ve missed a cut. When we came home Sunday, this is what we saw in the backyard. 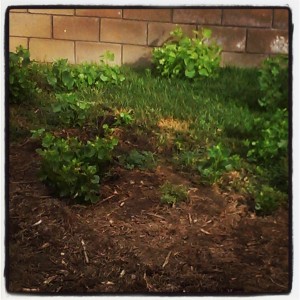 We cut down two trees. And forty sprouted up in their place. It’s worth thinking about, huh?

PS: I know that Shea has to get out there and take those sprouts down, but in my heart, I am rooting for the sprouts.