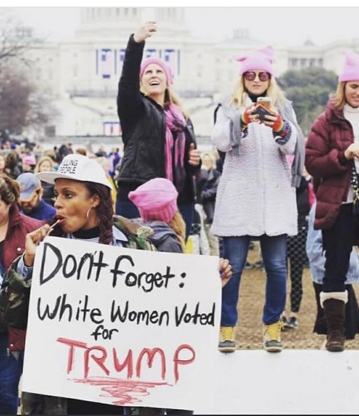 This picture. It’s from the Women’s March in 2017, but the message resonates even after a year. Maybe more, after Charlottesville and Roy Moore and #metoo and all the other mind boggling crap that happened this year.

I didn’t vote for Trump, because I’m a pro-life Christian. But I’m white and I KNOW that with those lame ass pink hats and the Sisterhood of the Traveling Persistence, we made the women’s social justice movement Pinterest-able, and then acted like we invented the damn thing.

It’s not that #metoo isn’t important, because it is and, #metoo.

It’s not that women are not marginalized, not abused, not underrepresented, not all of it.

But there’s something off about the pampered and privileged white women of Hollywood taking a diamond-laden and perfectly coiffed stand against sexual abuse in the workplace while still clamoring to act in movies that objectify women, glorify violence and desecrate marriage.

It’s in this picture too, where white women stand with carelessly curled hair and memorialize their “social justice girls weekend” with selfies.

As if this outrage didn’t exist until we felt it.

That black woman with the bored look on her face and the searing truth on her poster? She is LITERALLY keeping it real. God bless her, because that’s the business. And she’s probably been doing the business, like her mother and her mother before her and back and back.*

She’s also been waiting on us to show up. She is our dose of humility. This is not about a girls weekend or stylized pink ear pictures on Instagram. It’s not supposed to be fun. There won’t be wine later, for the love of God.

Show up. Be humble. Change the world.

*Turns out, she has. Her name is Angela Peoples and she was the director of GetEQUAL before leaving to start her own consulting group called MsPeoples. Her friend Kevin took that picture. You can follow her on Twitter at @MsPeoples.