Yesterday my daughters and I went to the Riverside National Cemetery, where my Grandpa Art is buried.  It’s only 4 miles from our house and on a drive by, we noticed that a small flag had been placed at every grave.  Every.  We just had to turn in. It was quite a sight to see.

But today, in honor of Veterans’ Day, I would like to tell the story of my great uncle, Marvin, who served his country faithfully during World War 2, to honor his sacrifice.

Marvin R. Walker was born in 1919, in a small farm town in Iowa. Marvin’s mother, Mildred, had divorced his father, Boyd, an uncommon occurrence in the early 1900s. On a day that Boyd had come to visit Marvin and his brother, Boyd Jr., then aged 3 and 2, he did something that is to the modern parent, unthinkable. He took the boys and moved to Canada. He left, without a trace. Mildred was heartbroken, but in 1921, women didn’t have the voice or the rights that we have today, and the children were lost to her. Boyd Jr. was lost forever as he died from influenza just a year later, unbeknownst to her.

Mildred got married again to a man who already had a daughter, Lenora, and had 3 more children, Betty, Mazie, and Jack.   Another divorce and the beginning of the Second World War found Mildred, Lenora, Betty, Mazie, and Jack off of the farm. Mildred continued her long time profession of teaching, while Lenora and Betty had moved to California and worked at Mc Donald Douglas aircraft, supporting the war effort.

Then suddenly, a miracle happened. Marvin found Mildred. He knew the town she lived in and wrote her a letter. He had enlisted in the Army’s Air Force division in a small town in Oregon and was stationed in Southern California, waiting for deployment. Mildred immediately wrote to Betty, and was soon on a train bound for California.  The reunion between mother and son was full of joy, elation, wonder, and excitement. Mildred was so proud of the man that Marvin had become.  He was kind, funny, sweet, incredibly handsome, and loved his mother dearly.  Betty and Marvin hit it off and were instantaneously best friends. Betty, now 92, recalls afternoons spent at the beach or the city pool, dinners together, and laughter. Lots of laughter.  “He would just grab me and go,” she told me in a recent conversation.  “He was so happy to have his kid sister.”

As many stories of The Greatest Generation go, the war soon separated this lovely, reunited family once again.  Mildred returned to Iowa, and Marvin went to a base in Arizona.  He begged Betty to move there with him.  She decided to stay in Long Beach, but they made plans, plans for his return… Then, tragedy. Marvin was sent to the Pacific front. He was a pilot, 2nd Lieutenant in the 419th Night Fighter Squadron. And on March 16th, 1944, his plane went down. He was lost at sea. Lost again, forever.

Betty is my grandmother.  And I have heard her stories of the war my entire life. And to this day, the pain of losing her brother, her sweet, gentle, long-lost brother, still makes her cry. As a mother, I cannot imagine the ache in Mildred, my Nana’s heart, losing her boy not once, but twice. It just doesn’t make sense. 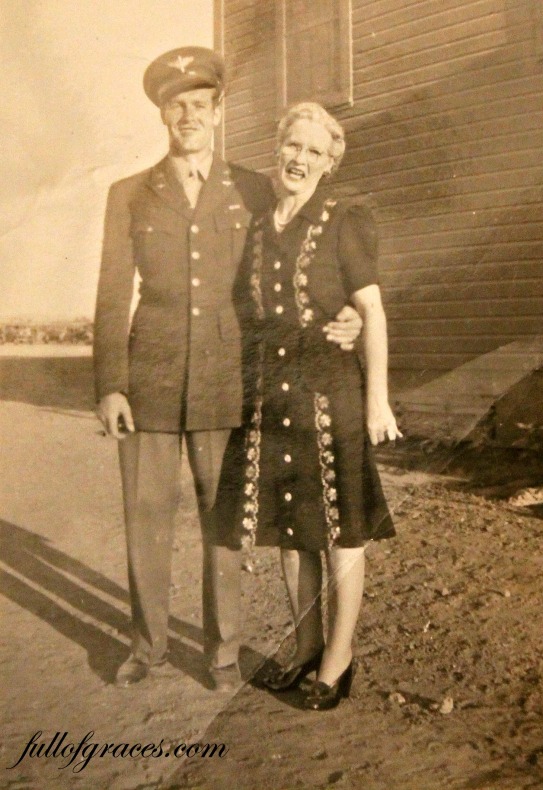 In 1959, Mildred published a book of poetry, including one for Marvin:

So, it has come

Straight into my heart;

The hopes, the plans, the joy

Of looking toward your coming;

Nor loneliness be comforted;

Let nothing ease the pain;

Cry out its grief to every

Of body, mind, and soul,

That I may know my loss.

As long as life shall last.

This sad story, however, does not end there.  Seventy years later, in the summer of 2014, came another “miracle,” the miracle of modern technology. In May of this year, my mom joined Ancestry.com to begin tracing our family tree. A fun hobby, we thought. Instantly we were overwhelmed with pictures, and family, and relatives, and DNA matches that we never knew existed. It’s amazing how much information there truly is and how easily it is all accessed. A click here, a click there, and suddenly a note in the inbox from a cousin containing a link to the website American War Graves.  This lovely website that contains the information of over 100,000 soldiers who were killed in action in World War I, World War 2, or the Korean War.

And there was his name. There was our Marvin.

I always imagined that since he was lost at sea, there is no burial site. However, under burial details, it says that our Marvin is memorialized on the Tablets of the Missing at the Manila American Cemetery, Manila, Philippines. I’m not sure why seeing just his name there affected me the way that it did, but a wave of tears flooded down my face. His picture hangs on our wall, his gorgeous, infectious smile staring out at us from the past. And I can feel the love and the loss when I look at him.  After all of these years, it felt like we had found Marvin.

As luck, or fate, would have it, I have a friend from high school who lives in Manila. Jopet and another good friend of mine, Ray, who was traveling to Manila in September, graciously agreed to take the time to travel to the memorial and make a rubbing of his name.  They faced a few obstacles: finding that Marvin’s name is *just* out of reach, trying to find a ladder, getting help from the staff at the cemetery. But my friends were amazing and did this task for me.  And I am so grateful to them for bringing Marvin home to us.

As I run my fingers over the letters of his name, I can’t help but feel the gravity of his sacrifice.  I feel the sacrifice that my family made, all of them:  Nana, Grandma Betty, Aunt Mazie, Aunt Lee, and Uncle Jack, who still remembers seeing Marvin’s picture in his mother’s room and dreaming of the brother that he never met.  The heaviness of this loss never quite healed for any of them.

There is something quite healing though, knowing that he is memorialized somewhere, that he hasn’t been forgotten.  It feels like this loss isn’t our own.  Nana never knew about the Tablets of the Missing.  She never knew that there was a sacred place that honored her boy.  But I think it would have meant the world to her to know that America, too, felt her loss and honored him.

I know that our story is not unique.  I know that so, so many have braved this ultimate sacrifice for this great country of ours.  I know the sacrifice that their families endure, all to carry out the cry for liberty.  Veterans’ Day honors those who were willing to give their lives for the United States of America, and even if they do not give their full measure of devotion, they and their families give so much protecting us.   To the veterans reading this, to those currently serving our country in the military, to the family members of our soldiers, please accept our heartfelt thanks and please know that Jen and I honor you on this Veterans’ Day.

6 thoughts on “The Greatest Sacrifice ~ Dana”