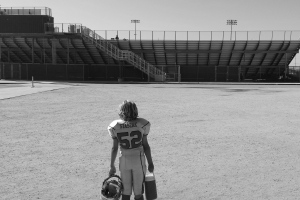 By now you must know the story of the high school football players who clocked the ref.

For some insane reason, Good Morning America and Outside the Lines hosted these boys and their lawyer on Friday morning so they could rationalize their behavior.

The ref may have used racial slurs when referring to the players. The coach may have told them to take the ref out. If those two things are true—and I am of the opinion that at least one of them is—then, so what?

The two boys would like us to believe that they didn’t want to hit the ref, but they were following orders. And that the coach who told them to make the hit is like a father to them, so they obeyed.

I laughed out loud because this approach is typical to their generation. Nothing is ever their fault–even when we have them on tape.  Hopefully some adult in their lives will seize on this moment to teach them about personal accountability.

It’s not just what the kids said. It was the comments underneath the article, too. A lot of commenters were of the opinion that if the ref said what the players say he said, then he deserved it.

“What were they supposed to do? Let him get away with it?” Or “If they hadn’t hit him, he would have gotten away with it.”

As if there aren’t rules and governing committees and administrators who can handle this very type of thing.

You know what would have made real, lasting waves? A coach pulling his team off the field to protest racist comments made by the official.

Instead, a forfeit was more costly in that moment than integrity.

After twenty years of playing and coaching, I can say with certainty that these kinds of things do not come from nowhere. Everybody knows when a program is off the ranch. From coaches to parents to the school and district administrators—they all are lying if they say they had no idea this was the tenor of that football program. Also when they protest “This is not who we are, this is not what we stand for”.

Yes it is. The NCAA calls it “lack of institutional control” and it is never a surprise. Only a regret.

If you are going to let your child get mixed up in the world of sports to the extent that they are wearing a varsity jersey in high school, then you have an obligation to know what kind of a program you are sending them into.